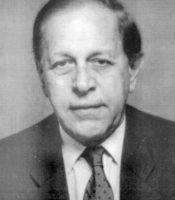 Vladimir Jovanović was born in Bela Crkva in 1923. He graduated from the Faculty of Law in Belgrade in 1950, where he also earned a doctorate degree (1955) with the thesis “Right of Insurer against Third Party Tortfeasor". Prof. Jovanović developed his university career at the Faculty of Law in Belgrade. The same year he got his doctorate, he was elected assistant professor; in 1960, the Faculty appointed him for the associate professor and in 1966 for the full professor. In 1956, prof. Jovanović graduated from the European University Center in Nancy. He carried out numerous functions, of which we shall list only few: Dean of the Faculty of Law in Belgrade, lecturer by invitation at numerous European and worldwide universities: Paris, Cairo, Alexandria, Strasbourg, Lisbon. His papers were included in the international comparative law congresses in Budapest, Melbourne, Sydney and Brazil. He was the head of numerous scientific and research projects for the Republic Community of Science, President of the Association of Lawyers in the Yugoslav Economy, president of the Selected Court of the Serbian Chamber of Commerce, arbitrator of the Foreign Trade Arbitration at the Yugoslav Chamber of Commerce and arbitrator of many ad hoc arbitrations, the mentor of numerous master and doctoral theses. Impressive is the number of papers he published in domestic and foreign legal journals (about 180), whereas his Commentary on the Law on Contracts and Torts and the Law on the Fundamentals of the Property and Personal Insurance System was a great professional inspiration. In addition to the published doctoral thesis, we shall mention the following as a few more important papers: Business Law - Business Organizations, Insurance in Economy, Principle of Indemnity, Export Credit Insurance, Bill of Exchange and Check Law (co-authored by professors Milan Bartoš and Zoran Antonijević). In the period 1979 to 1993, professor Vladimir Jovanović was the Head of the Institute for Comparative Law in Belgrade.

We could talk much about the scientific contribution of prof. Jovanović, but two, in any respect, inevitable foundations should by all means be mentioned. The first is the contribution to the science and profession of Insurance Law, and the second to the science and profession of Status Commercial Law. In the entire science of Commercial and International Commercial Law, and especially in the field of Insurance Law and Status Commercial Law, prof. Jovanović showed all the qualities of a brilliant legal mind, a top comparative lawyer, an excellent legal analyst and an even better synthetist.

Sparkling thought, clarity of mind, elegance of legal expression, gentility and moderation of a top intellectual, communicative openness and the inherent spontaneity and modesty are all the qualities that adorned the human and professional intellect of prof. Jovanović.

With his entire scientific, professional and pedagogical work, prof. Jovanović left an indelible mark on both the domestic and international law public. He passed away suddenly, in 1993.

(Biography was written on the basis of the text of prof. Mirko Vasiljević, PhD, "On the Work of Professor Vladimir Vlado Jovanović, PhD" published in the journal Law and Economy No. 3-6 / 1995).